skip to main | skip to sidebar

After 10 grueling hours at the Rafah Crossing point between Egypt and Palestine on Wednesday, Sharon Wallace (a long-time MECA supporter) and I finally entered Gaza.

There are so many stories to tell from our first day in Gaza. So much pain and destruction. But there is one story in particular that I think the world needs to hear. I heard about a mother who was at home with her ten children when Israeli soldiers entered the house. The soldiers told her she had to choose five of her children to 'give as a gift to Israel.' As she screamed in horror they repeated the demand and told her she could choose or they would choose for her. Then these soldiers murdered five of her children in front of her. Today I learned that the concept of 'Jewish morality' is truly dead. We can be fascists, terrorists, and Nazis just like everybody else. And the international community must demand that this never be allowed to happen again. **PLEASE READ UPDATE FROM BARBARA BELOW**

Sharon and I stayed with a family in Rafah Refugee Camp on Wednesday night. They warmly welcomed us into their home and shared tales of horror from Israel's three week war on Gaza. Today we drove through Rafah, Khan Younis, Nuseirat Refugee Camp and Gaza City.

The destruction and trauma in the Gaza Strip is even greater than I expected. Any attempts at describing what we saw will fall short. Instead I want to share these photos. 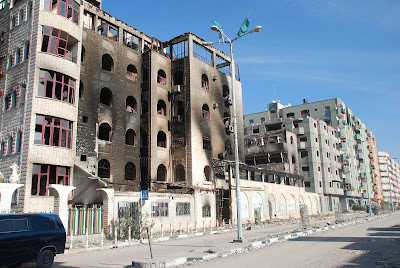 Al Quds Hospital, Gaza City, was directly hit by Israeli artillery shells on January 16. Patients had to be evacuated as much of the hospital went up in flames. 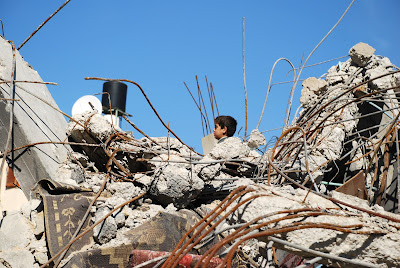 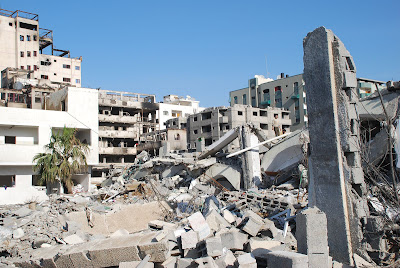 These photos are all the ruins of homes in residential neighborhoods. 4000 homes have been completely destroyed and 20000 partially destroyed.

***THE STORY: UPDATE***
To all who care about the children in Gaza:

I have just returned from 3 and a half weeks in Egypt and Gaza with Dr. Mona El-Farra delivering an ambulance, 4 tons of much needed pediatric medicine, tons of milk and baby cereal, 29 wheelchairs, and a truckload of crayons, magic markers, paper and coloring books for children in Gaza. It was a very trying visit.

I have been to Palestine many times over the past 21 years but never have I seen anything like what I saw this time. I will never forget the sadness, the smell, the destroyed homes, schools, mosques and cemeteries. I want to make clear this is not an apology but an explanation of what happened.

While I was away I told a story that was told to me by several people about a family in Gaza. This story received much attention and many people wanted more information so I contacted
my friend Talal and asked him to research the story. Here is his response:

It's the first time i have had internet. I hope you are O.K...you and all of our friends.

I heard from Dr. Mona that you are under great pressure because of the story you have published about the crime of that woman. Be sure that it was a fact and we are ready to receive any investigation committee to check out the facts. But as you know during the wars and when death is very close, the popular memory interferes and colors the action with it's special details.

We all heard the story on the local radio as I narrated it to you. But when you wrote the story and you faced so much pressure I decided to investigate and caught the real story.

It's not so far from from what you reported because the victims are the same...the story happened in Bourij Camp in the middle of the Gaza Strip. The Israelis called the woman Manal Albatran and told her that they wouldn't kill her or her husband Hussein Albatran, instead they would make them die of sadness because they would kill her children. The next day they shot her house with a rocket killing her and 5 of her children.

The father who is an employee at an UNRWA school and the youngest child were saved.

This is the real story and I hope the amount of victims will convince others to believe the crimes we face. Thanks a lot for your appreciated visit and I hope to see you again soon.

This is a horrific story. What can be done to collect more evidence? Have you notified the U.N., journalists etc? What can readers do to help?

I've posted this article to reddit. There seems to be quite a bit of scepticism surrounding the story of the mother who's 5 children were killed by Israeli soldiers. Have you been able to identify the woman involved or are you able to provide any additional proof that this story is true?

Very sad. I can only hope that Israel gets prosecuted for its war crimes...

Thank you for valuing truth over identity. It's always been the only real path to progress.

You don't have to believe every crazy lie someone posts in the internet. and certainly not to relay it to millions of ignorant readers to read. In this operation the Israeli Army exercised more tolerance and consideration of civilian lives than any modern army would.

can you report this/ them to report to Aljazeera,so this can be confirmed. appreciate the work you do, Aljazeera says it hasn't heard anything about this. please email them, and post an update.

Much horror happened in Gaza and surely Israel is guilty of terrible crimes but...ciruclating this story w/o being able to name the victim or how her story came to you seems like a recipe for a story that lacks credibility.

If the story is true it would be absolutely horrific & a war crime of the first order. But can't we get more information & documentation before we assume this event happened as narrated?

A friend of mine has e mailed Barbara for such information as have a few commenters here. Pls. Barbara do what you can to authenticate this story beyond what you've reported above.

Remember, no one first believed what the Nazi's did to jewish people in the 1930-40's. Now it's happening again except for the fact now most media outlets are controlled by Zionists and suppress stories like this.